The Val d’Orcia extends from the hills south of Siena to Monte Amiata.

It’s probably Tuscany’s most famous countryside, best known for its characteristic cypress-filled hills and even more enjoyable wineries, most of which produce the Orcia DOC.

Val d’Orcia is so picturesque, it was a declared an UNESCO World Heritage Site precisely for its aesthetically pleasing landscape and depiction in numerous Renaissance art.

One of the Val d’Orcia’s many famous towns, Bagno Vignoni stands out for the one-of-a-kind thermal pool in its main piazza.

In the past, the pool was enjoyed by illustrious names that included Pope Pius II, Catherine of Siena and Lorenzo de ‘Medici.

Today it’s just for show but it does provide a beautiful centrepiece to this quiet country town.

Described by Pope Pius II as the ideal Renaissance city, Pienza is the Val d’Orcia’s most famous destination.

It’s an UNESCO World Heritage Site renowned for its cultural, historical and artistic heritage and its religious architecture is particularly impressive.

The birthplace of the red wine Brunello di Montalcino, this town is more than just a watering hole.

Like many medieval towns in Tuscany, Montalcino experienced long periods of peace and prosperity.

During the late Middle Ages, its location on the ancient Via Francigena, the main road between France and Rome, ensured it plenty of passage and plenty of coin to build spectacular churches, fortresses and abbeys.

The Val d’Orcia is the birthplace of some of Tuscany’s most beloved products including pici, a type of thick hand rolled pasta, salumi di Cinta Senese, cold cuts made from a black and white spotted pig that’s native to the area, the pecorino cheese of Pienza and the Brunello di Montalcino, a very famous red wine that’s almost as good as Chianti. 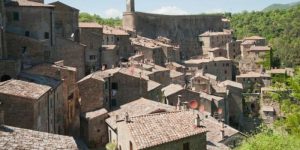